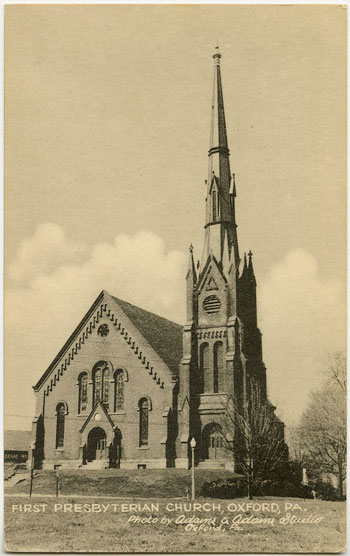 For more than 250 years this church has struggled to hear, and then do, the will of God in this place. Scotch-Irish Presbyterians first gathered for prayer here in the valley west of Pine Street around 1725. A tent, their first church in the town then called Hood’s Tavern, was placed on this site around 1730. Presbyterians worshiped there for more than 20 years before formally organizing in 1754 and constructing a log church on the green in the center of town. In 1775, on the eve of the American Revolution, they replaced this log building with a church of brick.

Both the church and the town grew in the nineteenth century. While the municipal fathers changed the town’s name shortly after 1800, the church fathers enlarged their brick building and moved it across the street to its present location in 1833. Expanded again in 1852, the old brick building was replaced by a new one in 1865 – 1866, at the end of the Civil War. This church, increased in size around 1900 to accommodate the choir and organ, with Christian education annex added in 1957, was the one that burned to the ground on Memorial Day, 1989.

Discounting improvements and additions, the building we dedicated in 1996 is the third one constructed on this site and, counting the tent in the Pine Street valley, the sixth one used by this family of faith in the period since 1725.

What God has done with bricks and boards is surpassed, however, by what God has accomplished with people and programs. When the church building burned in 1989, more than 20 community groups had to find a new home, and almost as many groups affiliated with the church also became homeless. The new building, in size and orientation, is designed to allow for the continuation of all of these ministries, and most of them have returned, and many others have been added. The basic decision to rebuild the church on this site represents a commitment of the church to continue its historic local mission.

Oxford Presbyterians have also made their mark in the nation and around the world. Traditionally the church has called ministers of extraordinary gifts. One of them, Dr. Ebenezer Dickey, twice served as Moderator of the General Assembly. His son, John Miller Dickey, Pastor from 1832 – 1856, celebrated the Centennial of the church in 1854 by establishing Lincoln University, the first university in America to choose as its mission the higher education of African Americans. Demonstrating that history sometimes comes full circle, Ashmun, the Presbyterian congregation associated with Lincoln University merged with Oxford church in 1968.

Many other men and women of the church have distinguished themselves in both clerical and secular services. Their ranks include farmers, laborers, teachers, politicians, lawyers, doctors, social workers, and a variety of businesspersons. Their work is a testimony to some of what God has done.

We trust the God we know through Jesus Christ to lead us into the future. Our far reaching plans are limited only by imagination and congregational involvement. We hope that you will join us to be a part of what God has in store for us!

Join us for online worship or in person every Sunday morning at 10:30! In-person Sunday school is available for ages K-Grade 12 at 9:30.

PLEASE NOTE: The wearing of face masks is now optional for all individuals, regardless of vaccination status, while at OPC..

Experience our self-guided virtual women's retreat at your convenience! Click here to begin!